I have received countless emails from both of you over the last several months. You have always attacked newly married couples, donors to No on 8, elected officials, others who support equality and me as a way to raise money. Well, imagine my shock and awe when I visited your web site the other day and saw that you apparently have a lesbian couple in flash mode who appear on your home page. Below is a photo of what looks like two women who are interspersed with non same-sex couples on the NOM site. We at Californians Against Hate applaud your support for equality by featuring this happy looking couple on the NOM web site: http://www.nomcalifornia.org/site/c.htJSJaMQIuE/b.3958623/ 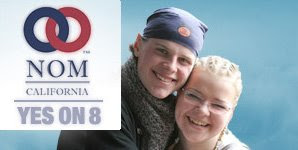 I certainly hope that you won’t take this couple off your web site now. It is such a wonderful statement to have a same-sex couple on the web site of the National Organization for Marriage. Now that we’re playing for the same team, I am sure that you will want to officially oppose Proposition 8. Maggie, stand with us and applaud California for leading the way as it did 60 years ago when it stood first among states and allowed interracial marriage. You see Californians are used to doing the right thing and leading the nation in civil rights and equality.

Also, Maggie, since you literally wrote the book, The Case for Marriage: Why Married People are Happier, Healthier, and Better Off Financially (Doubleday, 2000), it makes sense that you would embrace gay marriage and feature a same-sex couple on your web site. Are they lucky enough to be married? Is that why they are smiling? Are they now happier, healthier and better off financially, too? By the way I snapped up a copy of your book on Alibris. It was a real steal at only $1.99 http://www.alibris.com/search/books/author/Gallagher,%20Maggie

I have been curious about something when I get all of your emails. You say that you are the National Organization for Marriage California, but most of the emails from Brian are signed using your New Jersey address:

Your latest email (copy below), has your California address on it. So I thought I’d drop by 1530 East First Street, #218 in Santa Ana. What a surprise, no sign up or any NOM presence. It instead is the tiny CPA office of John G. Brown. Any relation? Is the NOM California office also in New Jersey? 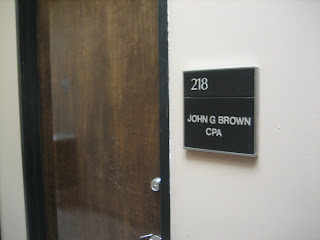 As we move into the final week of the campaign, I keep thinking about how your early backers and you placed Proposition 8 on the ballot here in California. You both helped lead the effort to qualify this initiative constitutional amendment by raising $2 million to hire the thousands of paid signature gatherers to put his hateful initiative on the ballot. What a shame it is that over $60 million has been spent by both sides in this election. It seems to me that the $60 million could have been spent in so many other ways to help people instead trying to hurt them.

I hope that you will realize the error of your ways and join with us in the final days of this election and do the right thing, and back Marriage for All, so that the millions of gays and lesbians in California have the opportunity to be, in your words, “Happier, Healthier and Better off Financially.”

I come to you today with one final, urgent appeal for Prop 8. The need has never been greater. Working with ProtectMarriage.com and the Yes on 8 campaign, we have just 5 days to raise the $3 million needed to put Prop 8 over the top.
Please use this hyperlink to make one final emergency contribution of $50, $100 or even $500 in support of Proposition 8. Please click here today to make a generous contribution to help put Prop 8 over the top! (http://www.kintera.org/TR.asp?a=gvLULgM0LqKZLjI&s=ciLRL3PHLkJWJ3NLLvH&m=lvJ1JhOSKgL7G)
Over the past two weeks, our opponents have raised an amazing $11 million, as Hollywood liberals, labor unions, and gay marriage activists have responded to a last-minute fundraising blitz.
Just over the past month, the No on 8 campaign has received major gifts from: * Brad Pitt ($100,000) * Steven Spielberg and wife Kate Capshaw ($50,000 each) * George Lucas ($50,000) * Ellen deGeneres ($100,000) * Suze Orman, TV financial expert ($10,000) * T.R. Knight of Grey’s Anatomy ($50,000) * Monica Rosenthal of Everybody Loves Raymond ($25,000) * John August screenwrite for Charlie’s Angels ($50,000) * California Teachers Association ($1,000,000) * Hollywood Producer Steve Bing ($1,000,000 matching gift) * California Teachers Union Issues PAC ($2,000,000) * California Nurses Association ($40,000) * Service Employees International Union ($100,000)
And just Tuesday night Barbra Streisand, Melissa Etheridge and Mary J. Blige highlighted a $25,000 a plate fundraiser that raised $3.9 million for the No on 8 campaign. Unfortunately, these last-minute millions flowing in to the No on 8 campaign are being used to buy ads that deceive voters about the truth of same-sex marriage.
It’s already clear the only way our opponents will win is by deceiving voters about gay marriage. Right now they are working frantically to ensure voters that gay marriage will never impact their children in schools — despite the reality of what is going on right now in Massachusetts. We can’t let them get away with it.
The No on 8 is now spending $1 million a day to mislead California voters about Proposition 8. . . . And if we can’t match them, we will lose. It’s that simple.
Please use this hyperlink to help stop Hollywood liberals and labor unions from deceiving California voters. Please make a last-minute emergency contribution today to combat these deep pockets funding the gay marriage campaign. (http://www.kintera.org/TR.asp?a=9oJGIVNyFjJMJZK&s=ciLRL3PHLkJWJ3NLLvH&m=lvJ1JhOSKgL7G) (http://www.kintera.org/TR.asp?a=9oJGIVNyFjJMJZK&s=ciLRL3PHLkJWJ3NLLvH&m=lvJ1JhOSKgL7G) I can’t overstate the significance of this last-minute fundraising push. Over the past 2 weeks, our opponents have out-raised the ProtectMarriage coalition by a 9-1 margin, taking back the overall fundraising lead.
More importantly, without additional funding for Prop 8, our opponents will outspend the Yes on 8 campaign by as much as $3 million per week between now and November 4th. The latest polling shows the Yes on 8 campaign ahead — but barely — as the latest CBS News poll shows Prop 8 winning by a narrow 48-45 percent margin. We know that TV ads make a big difference in the campaign, as our own TV ads have been widely credited with producing a 10-point swing in the polls as Prop 8 surged into the lead earlier this month.
We simply cannot afford to let ProtectMarriage and the Yes on 8 campaign be outmanned and outfunded in these final two weeks. Already our coalition is historic in terms of the grassroots support we have received from all across the state. If we fail to step up now, all may be lost. We simply cannot take that risk.
So many of you have already given so much to stand for marriage. Yet we are now coming back to all of our supporters for one more, last-minute, donation to save Prop 8. Will you join me in doing all we can to make sure Prop 8 passes, preserving marriage in California and sending a clear message to the rest of the nation?
With just two weeks left until the election, this will be our final fundraising appeal for Prop 8. But as part of the Yes on 8 Coalition, we need your help today.
Please don’t wait. . . . Please make any contribution you can. And please do it today. Working together we can build a strong margin of victory to send a message to the nation. Don’t risk looking back with regret on November 5th. Use this hyperlink to make your most generous contribution today. (http://www.kintera.org/TR.asp?a=chKMI4OKLmITK9J&s=ciLRL3PHLkJWJ3NLLvH&m=lvJ1JhOSKgL7G) (http://www.kintera.org/TR.asp?a=chKMI4OKLmITK9J&s=ciLRL3PHLkJWJ3NLLvH&m=lvJ1JhOSKgL7G)
We need your help today through a last-minute emergency contribution. Thanks for all you are doing.
Blessings,
Brian S. Brown Executive Director
National Organization for Marriage California
1530 East First Street, #218
Santa Ana, CA 92701
Toll-Free: (888)-201-8929bbrown@nationformarriage.org
www.nomcalifornia.org (http://www.nomcalifornia.org/)

1 thought on “IS NOM NOW SUPPORTING SAME-SEX MARRIAGE? IS THAT A LESBIAN COUPLE ON THE NOM WEB SITE??”