LOS ANGELES, CA – Californians Against Hate would like to share some excellent news coverage on two of the top four largest individual contributors to California’s Yes on Proposition 8 campaign. John Templeton. Jr. of Bryn Mawr, Pennsylvania, who together with his wife contributed $1,000,000 to the campaign to take away same-sex marriage in California, were the subject of a big feature story in yesterday’s Philadelphia Inquirer by David O’Reilly

The Templetons have given more money to take away marriage equality in a state 3,000 miles away from there’s than anyone with the exception of California’s Howard “Howie” Ahmanson of Newport Beach. These two are ranked #1 and #2 on the “Dishonor Roll” posted on Californians Against Hate web site. The “Dishonor Roll” lists all 741 contributors of $5,000 and more to the Yes on 8 campaign as of October 18th https://californiansagainsthate.com/

In the last week, Elsa Prince of Holland, Michigan who gave $450,000 to the Yes on 8 campaign had two big stories written about her in prominent Michigan newspapers. The first appeared in the Detroit Free Press in the paper’s leading political column, Politically Speaking on October 22nd http://www.freep.com/apps/pbcs.dll/article?AID=/20081022/NEWS15/810220314/1008/NEWS06

The story covered her mega contribution of nearly half a million dollars, and also the commercial that Californians Against Hate produced staring an Elsa Prince look-alike. The commercial was produced by John Keitel and his Shelter Productions and is appearing on Current TV. It depicts a little boy playing her grandson, who looks up innocently and asks her, “Why did you give so much money, Grandma?” http://current.com/items/89433673_baseball_boy_2008 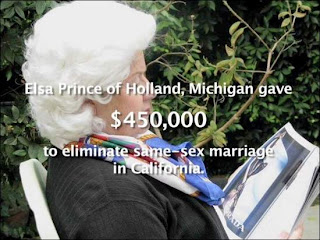 In yesterday’s Grand Rapids Press, there is also a feature story on Elsa Prince by Ted Roelofs http://www.mlive.com/grpress/news/index.ssf/2008/10/local_money_fights_gay_marriag.html

The story covers Mrs. Prince’s $450,000 contribution to Yes on 8 and her son-in-law Dick DeVos’ $100,000 contribution to Florida’s Amendment 2, which would also prohibit same-sex marriage in that state. DeVos is the son of Amway co-founder Richard DeVos and was the unsuccessful Republican candidate for Governor of Michigan in 2006. Elsa Prince’s son, Erik is the most famous family member. Erik Prince is best know as the founder and head of Blackwater Worldwide, the highly controversial private defense firm hired by the US Government in Iraq and Afghanistan.

“These out of state mega donors sure don’t like gay marriage,” said Fred Karger, Campaign Manager of Californians Against Hate. “It seems like there are far more important causes to give their millions of dollars to instead of sending it all the way to California to hurt so many people in our state, whose only crime is wanting to get married just like they can.”

Californians Against Hate began in July of this year, and its mission is to let the world know who are the major contributors to the Yes on Proposition 8 campaign.

4 thoughts on “Mega Donors From Out of State Press Coverage”