SAN DIEGO, CA – Considering that every major Evangelical and Christian leader in San Diego spoke at and helped organize Sunday’s Yes on 8 campaign rally, we raise the question, where were all the people? Where were all their parishioners and supporters? On a Sunday, no less. Only 200 to 300 people showed up according to the San Diego Union-Tribune and the Los Angeles Times. This is the same leadership that expected 80,000 people at Qualcomm Stadium for “The Call” the Saturday before last November’s election. Maybe 8,000 showed up. They even had James Dobson speaking to a nearly empty football stadium. 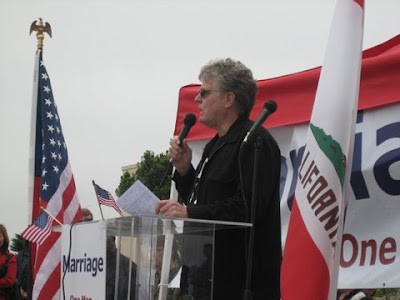 Jim Garlow (pictured above) of Skyline Church and Miles McPhearson of the Rock Church (Miss California’s Church) + 15 other religious and political leaders could only muster a couple hundred people to come to the San Diego County building right after Sunday services – pathetic. 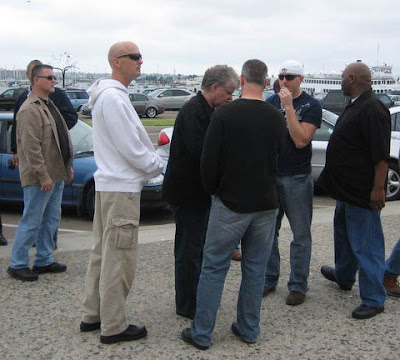 Jim Garlow had 6 (count ‘em, 6) bodyguards with him all day! There were lots of San Diego police at the Rally, but Pastor Garlow brought his own militia.
There were no Mormon speakers on the program, in spite of all they did to pass Proposition 8. The Church of Jesus Christ of Latter-Day Saints (Mormons) have a huge presence and a big Temple in San Diego . Maybe this is why;

The Wall Street Journal quoted Master of Ceremonies, Pastor Jim Garlow, as saying, “I would not, in all candor, have been meeting them (Mormons) or talking with them had it not been for” the marriage campaign. Rev. Garlow said he had developed a “friendship” with the Mormons he met, although he feels the theological differences remain “unbridgeable.”

Nice way to treat the Mormons who raised $30 million to pass Prop 8! 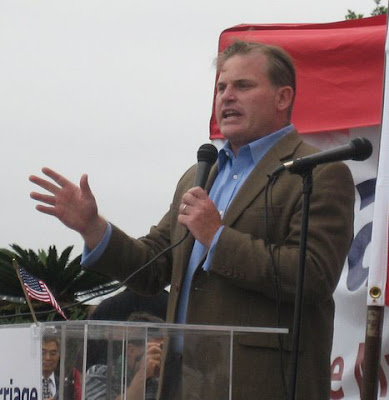 Brian Brown, Executive Director of the National Organization for Marriage (NOM), brought his entire family to San Diego from their home in New Jersey . That’s his wife and 6 small children. Maybe they got free rooms at the Boycotted Manchester Grand Hyatt downtown. Owner Doug Manchester gave a very early $125,000 to qualify Prop 8 for last November’s ballot.
Brown who works for Maggie Gallagher at NOM in Princeton , NJ was the featured speaker. Not quite the star quality of Charlize Thereon and Eric McCormack who spoke at Saturday’s No on 8 – Meet in the Middle 4 Equality Rally in Fresno , but Brian did a good job of rallying the couple hundred faithful.
Between Pastor Garlow’s 6 Body Guards and Brian’s 6 kids, they had a built in crowd. Are Yes on 8 supporters feeling ashamed and not wanting to go out and “celebrate?” We’re thinking, probably yes.
We at Californians Against Hate applaud all of the fair-minded people who stayed at home Sunday and did not turn out to “celebrate” the rights of millions of Californians being yanked away from them last November 4th. 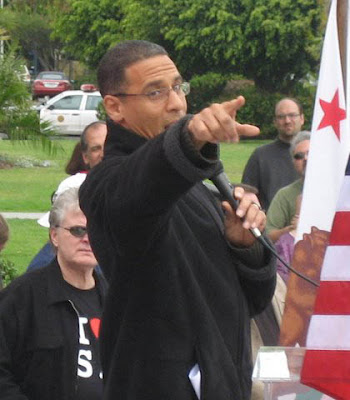 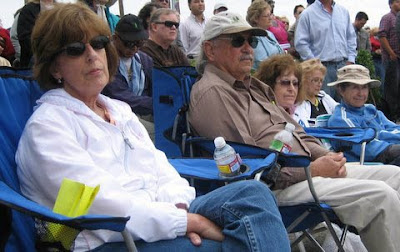 It was interesting to see that the bulk of those who did make it were all quite elderly. 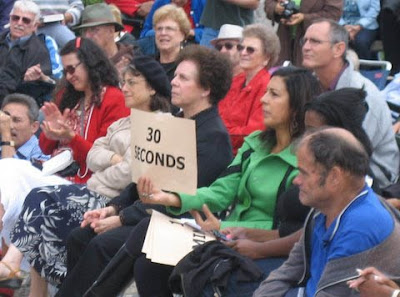 We thought this was the best part of the Rally, the time keeper!
Well, it was one for the record books:
“Most Disappointing Victory Rally of 2009.”