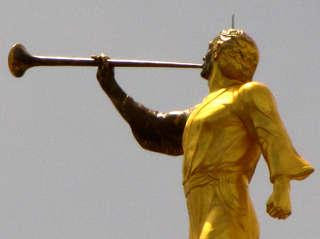 The Oquirrh Mountain Temple, Angel Moroni statue
was struck by lightening late Saturday.
SOUTH JORDAN, Utah – Mother Nature left her mark on a new Mormon temple over the weekend when a lightning strike hit the building, blackening the golden angel that tops it.
The 60,000 square-foot Oquirrh Mountain Temple of The Church of Jesus Christ of Latter-day Saints was hit Saturday during a rain storm.
Church spokeswoman Kim Farah says no structural damage resulted from the strike on the Angel Moroni. She says a crew will re-gild the 10-foot-6-inch statue soon.
Most Mormon temples are topped with a statue of the angel, who Mormons believe led church founder Joseph Smith to the golden plates from which the Book of Mormon originated.
The Oquirrh temple is Utah’s 13th and the 130th church temple worldwide. It will open in late August and will serve an estimated 83,000 Latter-day Saints.