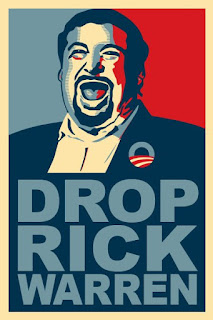 The gay and lesbian community, our millions of friends and all other fair minded Americans are extremely hurt and angry with your choice of Reverend Rick Warren to give the invocation at your Inauguration next month.

In an interview just 4 days ago, Reverend Warren compared gay marriage to legitimizing incest, child abuse, and polygamy. He said:

How can he talk about loving same-sex couples who wish to marry like everyone else in this cruel way? This guy is a bigot plain and simple. He has a long history of saying mean and hateful things to so many Americans with whom he does not agree, that he seems an odd fit into your celebration as you assume the Presidency of the United States.

So today we are asking you to drop Rick Warren from delivering the invocation at your swearing in ceremony.

We will be launching a new web site www.DropRickWarren.com to ask others to join in our effort to help persuade you to choose another man or woman to take this place of honor at your historic Inauguration.

We hope that you will drop Reverend Warren soon, and instead pick one of the thousands of religious leaders who don’t offend the gay and lesbian community and so many other Americans. You campaigned and were elected to unite this country and your removal of Rick Warren would go a long way toward achieving that goal.

Rick Warren was a major supporter of California’s Proposition 8, the successful ballot initiative to ban gay marriage. Many prominent national gay leaders have called for Reverend Warren to step aside or for you to remove him.

Human Rights Campaign President Joe Solmonese, declared your invitation to Rick Warren a “genuine blow” to gay Americans. “And by inviting Rick Warren to your Inauguration, you have tarnished the view that gay, lesbian, bisexual and transgender Americans have a place at your table,” he wrote.

Equality California Executive Director, Geoff Kors said yesterday that, “I have decided to decline the invitation to attend the inauguration as I cannot be part of a celebration that highlights and gives voice to someone who advocated repealing rights from me and millions of other Californians.

Mr. President-elect, we know that you are trying to be inclusive at your Inaugural and in your administration and we applaud that. We, however, strongly urge you to do the right thing and reconsider your choice of Rick Warren. If you drop Rick Warren, it will send a loud and clear message to America and the world that you do not tolerate discrimination and hatred from anyone.

Thank you very much.

1 thought on “Letter to President-elect Obama”