Manchester should bridge the rift with apology

When Doug Manchester, owner of three San Diego hotels including the Manchester Grand Hyatt, gave $125,000 to help qualify Proposition 8 for the ballot, it’s unlikely he foresaw a boycott by the GLBT community. But even if he had, he likely wouldn’t have cared. In fact, when a coalition of union labor and GLBT organizations began the Boycott Manchester campaign, internal communications leaked to the public show he didn’t.

Most estimate that, as of this month, Manchester has about seven million reasons to wish he had. That’s the estimated amount the 10-month boycott has cost him so far. The boycott is headed up by Californians Against Hate and UNITE Here Local 30 labor union and supported by San Diego Pride at Work, San Diego LGBT Pride, and many other community leaders. It’s been so successful, Manchester is now trying to make amends with the GLBT community.

To get him out of the doghouse, Manchester hired openly gay crisis PR guy, Howard Bragman from Los Angeles. It took Bragman three months to come up with his crisis PR plan – a “settlement” to end the boycott, which he announced last Friday at the International Gay & Lesbian Travel Association’s (IGLTA) annual convention in Toronto, Canada.

Bragman sent Manchester’s marketing director, Kelly Commerford, to make the pitch. Commerford – making it quite clear that he is gay – announced the offer to the 350 gay and lesbian travel professionals at a Hyatt-sponsored luncheon. He said Doug Manchester would offer $25,000 to a national organization that supports domestic partnerships and civil unions and make available $100,000 in hotel credits to GLBT organizations.

The settlement – or blood money as we see it – is laughable. In Toronto, it was boo-able, and that’s exactly what those present at the luncheon did, booing and hissing Commerford right out of the luncheon. He, along with three other Hyatt executives, never returned to the convention.
On a positive note, we will say thank you to Commerford for bringing the boycott to even more travel agents’ attention. With Pride season right around the corner, we hope that national travel agents who are booking travel for GLBT folks attending Pride will be mindful of the boycott.
Things aren’t going much better for Manchester back home.

The Human Rights Campaign announced it would not accept the $25,000, and Fred Karger of Californians Against Hate says his coalition is not budging. Manchester’s offer of $100,000 in hotel credits and services merely seeks to divide the GLBT community on the boycott, he says.
Manchester and Bragman had hoped to bypass such boycott organizers by taking the offer right to gay travel professionals, the press and the blogosphere, and at first some may have been tempted by his offer of $100,000 in free hotel credits to deserving San Diego GLBT groups and puzzled by his sudden concern about local GLBT groups. After all, it’s a very difficult time for nonprofits, and that kind of gesture is not insignificant.

Bragman was banking on groups taking advantage of the free room and meeting credits crossing the picket lines. In turn, he hoped Manchester could claim he was actually helping local groups and thereby marginalize Karger and his coalition.

But Karger and his coalition of community and union leaders stood firm. No local organization would cross a picket line or take money. With the boycott as well known as it is, who would even show up for the event, knowing there is an ongoing GLBT and labor boycott?
And Bragman’s own rhetoric is troublesome on two points.

He dismisses Manchester’s views as understandable given Manchester’s age (66) and religion (Catholic). And he says lack of bridge building, not donations by wealthy donors such as Manchester, is to blame for Proposition 8’s passage. “That’s why we lost Prop. 8, not enough bridge building,” Bragman said in one press story. Sounds like a feeble attempt to justify working for one of Proposition 8’s biggest supporters. Sadly, Bragman married his partner during the summer and so has every reason to want Proposition 8 to be struck down. But it seems that all the Benjamins Manchester is throwing at him made Bragman forget his own words.

Bragman wrote a commentary for the Huffington Post last November saying, “To my brothers and sisters in the GLBT movement and our friends, I urge you to use every legal and moral tool at your disposal to change hearts and minds. Peaceful protests, boycotts and community organizing are the tools of our trade and ultimately the things that will win this struggle.”

Rather than offering lip service, perhaps Manchester should create a more direct dialogue with union and community leaders. Anyone want to invite “Papa” Doug and his new gay step-child Bragman to a town hall forum? We’d certainly be game.

As a community, we should be proud that we do not accept blood money. We do not allow money to talk its way out of hateful actions.

As a community we should stand behind the coalition of community and labor organizations as they continue the Manchester Boycott. When Manchester is prepared to meet with union and community leaders, then the real dialogue can happen. Until then, Boycott Manchester’s hotels.
As for you Mr. Manchester, let us give you some advice on what to do when you’ve made a mistake. I’m sure it’s quite similar to what you taught your children to do, as we’ve taught ours.
Say, “I’m sorry I made a mistake. I’ve realized how unAmerican it is to deny any citizen of this great country the same civil rights others are afforded. Nothing less than full civil marriage for every American is acceptable. In the beginning of this debate, as it was first explained to me, the church would be involved. Thank God we live in a country that separates those two institutions. I sincerely apologize for my misunderstanding, and to help right my wrong I am writing a check of equal value to the ‘No on 8’ campaign to level the playing field.” Sign it: Doug Manchester.

There’s no need to hire an expensive, sellout PR firm. Just a simple heartfelt apology directly from you will do. Isn’t that the way you taught your children to do the right thing? Perhaps simple and heartfelt will go a lot further than the lengths you are jumping to bridge the rift you’ve created. 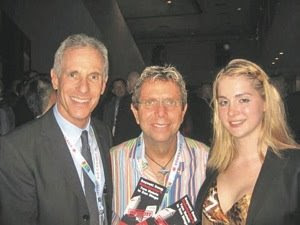 On May 8, Kelly Commerford, the marketing director for the Manchester Grand Hyatt announced at the International Gay and Lesbian Travel Convention in Toronto that Doug Manchester, the owner of the hotel, will give $125,000 to the gay community.

“Mr. Manchester is giving us [the GLBT community] a $25,000 personal donation and a $100,000 in kind,” Howard Bragman, Manchester’s public relations professional said. “These [funds] will go to gay groups to be determined,” he added, reiterating his support for gay and lesbian civil rights and civil partnership.

Many believe Manchester’s donations are in response to the backlash from the boycott waged against the Manchester Grand Hyatt for Manchester’s $125,000 donation to the “Yes on 8” campaign last summer.

A coalition of labor leaders and supporters of same-sex marriage announced last July, a full-scale boycott of the Manchester Grand Hyatt and other Manchester-owned properties. The coalition – which includes labor union UNITE Here Local 30, nonprofit organization Californians Against Hate, and is supported by City Councilmember Todd Gloria, San Diego Pride at Work, San Diego LGBT Pride and a number of community leaders – aims to inform Californians about Manchester’s contributions.

“I don’t think it’s because he suddenly cares about the rights of the LGBT community,” UNITE HERE president Bridgette Browning said. “I think he’s losing a lot of money. I think the travel industry universally recognizes that the LGBT community is a very profitable community for them to have staying in their hotels and patronizing their establishments.”

Fred Karger, founder of Californians Against Hate, was in Toronto during the announcement and says his organization along with labor unions will continue to boycott Manchester’s properties. The San Diego Hotelier owns three hotels, The Manchester Grand Hyatt, the San Diego Marriott Hotel & Marina, and The Grand Del Mar.

“[We will boycott] at an increased pace because of this [offer],” he said. “The organizers of the boycott are not intending to end the boycott because of his offer.”
Karger added gay organizations are under pressure to accept Manchester’s offer because of the economic downturn.

“I think it’s a sad situation because groups are in such need of money,” he said. “That creates a huge problem and puts all of these gay organizations in a very awkward position. I’m sure they would like to take the credits at the hotel. Who do you think would show up?”
Browning also confirmed UNITE HERE’s boycotts will continue.

The boycotts were also in response to poor working conditions. According to Browning and Karger, no attempt has been made at mending the relationship between Manchester and labor. Bragman was not able to comment on Manchester’s issues with labor, because he works with GLBT issues.

“Neither UNITE HERE nor any of the other organizations have heard from Mr. Bragman and Mr. Manchester,” Karger said, noting that he was approached by Manchester last July for a settlement. “My first question was ‘does this include the labor portion?’ They said no. We have nothing to discuss if we’re not going to discuss both.”

Bragman said he was not working with Manchester at the time of the alleged offer and was not able to confirm any information. Karger said if the GLBT community was offered a similar settlement as last year’s alleged settlement, “that would be different.”

“He’s trying to force people to come to the hotel, but he’s going to fail. It’s a dumb idea,” Karger said.

Bragman has come under scrutiny because he is a gay man and is working for Manchester.
“As far as personal criticism, I think people should look into my three decades of work in the GLBT community – what I have achieved, who I have represented and the awards I have been honored to receive,” Bragman said. “If people want to discount me or my work because of [my work with Manchester], so be it. I know who I am, what I’ve done and am very comfortable in my own skin.”
Bragman believes the GLBT community lost the battle over Proposition 8 because of a lack of communication.

“I believe the reason we lost Prop. 8 is because we didn’t build bridges to certain communities,” he said. “If we’re going to win in the future, we need to build bridges. When people offer an olive branch, we should be willing to accept it. I am trying to [help my client] begin a dialogue, build a bridge and find common ground.”

Bragman asserts Manchester is not homophobic.

Manchester is Roman-Catholic. It was also announced at the convention that Manchester supports civil unions and domestic partnerships but not same-sex marriages.

“Before Prop. 8, there was a great relationship [between the Manchester Grand Hyatt and] the [GLBT] community. We want to get that back,” Bragman said.

2 thoughts on “Manchester should bridge the rift with apology”