This past week, Equality California, the San Francisco-based group that fought to maintain gay marriage in that state, said it planned to support similar efforts in Maine. During a conference call in which Equality California officials talked about trying to reinstate gay marriage there in 2010, they also pushed support for their Maine counterparts.

The attention, and several press releases from both supporters and opponents of gay marriage, demonstrate a growing focus on the Maine debate and the importance it will have on a national level this year.

Both sides – supporters and opponents of gay marriage in Maine — have attracted dollars and expertise “from away.”

“Equality is our mission, and we support our brothers and sisters throughout the country,” Equality California Executive Director Geoff Kors said in a Friday interview. “Each time there are more people who are able to have the dignity and respect and rights that come with marriage, the better it is for everyone, and the better it is to restore marriage rights in California.”

Also on Friday, the Washington Blade, a gay and lesbian publication, reported that the Washington, D.C.-based Human Rights Campaign had donated $50,000 to No on 1 this past week, raising the total contribution from that group to $75,000.

The group is committed to donating at least another $50,000 to Maine, and it has field staffers working in the state, the Blade reported.

The group spearheading the people’s veto initiative, Stand for Marriage Maine, put out a release this past week, criticizing the California-based efforts.

“Stand for Marriage Maine’s opposition has constructed a glass house, claiming their campaign is being orchestrated by Mainers, not special interest groups from away,” the group said. “The Equality California announcement would seem to roll a boulder right through that glass house.”

Mark Sullivan, spokesman for No on 1, said the campaign “welcomes the support we’re getting from defenders of marriage equality.” Sullivan noted that Stand for Marriage Maine had already received more than $200,000 from out-of-state groups, according to campaign finance reports filed last month.

Sullivan said Maine organizers had not yet spoken to their California counterparts about how efforts could match up.

“We’ll be looking forward to meeting with them,” said Sullivan.

The money that Stand for Marriage Maine has received from national groups, particularly the National Organization for Marriage, was the subject of yet another critical e-mail – this one from a California group supporting same-sex marriage.

On Thursday, Californians Against Hate, based in San Diego, put out a media statement complaining that while Stand for Marriage Maine had received large sums of money from those groups, it wasn’t apparent who had donated money to those groups in the first place.

“We certainly don’t take much of it very seriously,” Marc Mutty, chairman of Stand for Marriage Maine’s executive committee, said, referring to the criticism by Californians Against Hate. “We are frustrated at the fact that it’s yet one more distraction.”

Fred Karger, founder of Californians Against Hate, sent a letter to the Maine Ethics Commission and the Attorney General’s Office, raising allegations of money laundering.

Jonathan Wayne, executive director of the commission, said his staff is interpreting the letter as a request for an investigation. They have forwarded the letter to the Stand for Marriage political action committee, he said. The staff needs to ask Karger for more specific information and charges, said Wayne.

Kate Simmons, spokeswoman for the Attorney General’s Office, said the office would aid the Ethics Commission in its work.

“We appreciate Wayne’s responsibilities to the people of Maine, and we will cooperate with them to the extent we can,” said Mutty. “We see all these accusations launched against us as very non-specific, just an attempt to further blur the issues.” Mike Tidmus Blog — Coverage of San Diego Kiss-In 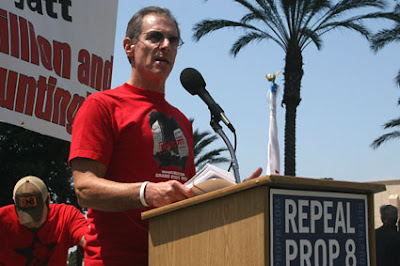 
The event comes after gay couples here and in San Antonio and El Paso, Texas, were arrested, cited for trespassing or harassed by police for publicly kissing. In Utah, the July 9 trespassing incident occurred after a couple were observed by security guards on a downtown park-like plaza owned by the 13 million-member Church of Jesus Christ of Latter-day Saints.
FAITH & REASON: Kisses ‘speak’ for gays confronting church policies
The court case was dismissed, but the kiss sparked a community backlash and criticism of the church.
“I don’t think that kiss would have turned out to be the kiss heard round the world if it were not for Proposition 8,” said Ash Johnsdottir, organizer of the Salt Lake City Kiss-In.
Atali Staffler, a Brigham Young University graduate student from Geneva, Switzerland, said she joined the 200 or so people who filled a downtown amphitheater for the event because she has watched her gay father and many gay friends struggle to find their place.

The 31-year-old, who was raised Mormon but is not active in the church, said the church shouldn’t be involved in Prop. 8.
“I encourage them to promote the values they believe in and to defend their religious principles in advertisements, but civil rights have nothing to do with religious principles,” she said.

Twenty-two people, many of them strangers to one another, gathered under the scorching sun on Washington’s National Mall to participate in the national smooch. They were gay and straight, couples and singles of all ages, with placards that read “Equal Opportunity Kisser” and “A Kiss is a Not a Crime.”
“This is America. A kiss on the cheek is OK,” said Ian Thomas, 26, of Leesburg, Va., who organized the Washington Kiss-In. “It’s got to be OK. If not, we’re in serious trouble.”

About 50 people, mostly gay and lesbian couples, gathered at Piedmont Park in downtown Atlanta and kissed for about five minutes.
“You think that America is evolving into a gay-friendly nation,” said Randal Smith, 42, “but what happened in Texas and Utah show us it’s still a long way off.”
National organizers say Saturday’s broadly held gay rights demonstrations were not aimed specifically at the Mormon church. But observers say the church’s heavy-handed intervention into California politics will linger and has left the faith’s image tarnished.
“What I hear from my community and from straight progressive individuals is that they now see the church as a force for evil and as an enemy of fairness and equality,” said Kate Kendell, executive director of the San Francisco-based National Center for Lesbian Rights. Kendell grew up Mormon in Utah. “To have the church’s very deep and noble history telescoped down into this very nasty little image is as painful for me as for any faithful Mormon.”
Troy Williams, who is gay and grew up Mormon, said ending the tension between gays and the church requires mutual acceptance and understanding.
“For both sides to peaceably coexist, we’re all going to have to engage in some very deep soul searching,” said Williams, a Salt Lake City-area activist and host of a liberal radio talk show.

Church insiders say Prop. 8 has bred dissent among members and left families divided. Some members have quit or stopped attending services, while others have appealed to leadership to stay out of the same-sex marriage fight.
But church spokeswoman Kim Farah said Friday that Mormon support for traditional marriage has nothing to do with public relations.
“It’s too easy for those whose agenda is to change societal standards to claim there are great difficulties inside the Church because of its decision to support traditional marriage,” Kim Farah said. “In reality the Church has received enormous support for its defense of marriage.”

Mormonism teaches that homosexual sex is considered a sin, but gays are welcome in church and can maintain church callings and membership if they remain celibate.
The church has actively fought marriage equality legislation across the U.S. since the early 1990s and joined other faiths in asking Congress for a marriage amendment to the Constitution in 2006.
Last year at the urging of church leaders, Mormons donated tens of millions of dollars to the “Yes on 8” campaign and were among the most vigorous volunteers. The institutional church gave nearly $190,000 to the campaign — contributions now being investigated by California’s Fair Political Practices Commission.
After the vote, many gay rights advocates turned their anger toward the church in protests and marches outside temples that singled out Mormons as the key culprits in restricting the rights of gay couples.
That constituted a setback for the faith, argued Jan Shipps, a professor of religious history and a Mormon expert from Indiana University-Purdue University Indianapolis.
Mormonism, Shipps said, has struggled with its image since its western New York founding in 1830 for a host of reasons, including polygamy.
Leading up to Salt Lake City’s 2002 Olympic Winter Games, the faith worked hard to craft a modern, mainstream image, touting its unique American history, culture and worldwide humanitarian work to thousands of reporters.
“This really undercut the Mormon image that had been so carefully nurtured during the Olympics,” Shipps said.
Church representatives don’t discuss public relations strategies or challenges publicly, but at a semiannual conference in April, church President Thomas S. Monson seemed to be clearly feeling a post-Prop. 8 sting.
In an era of “shifting moral footings,” Monson said, “those who attempt to safeguard those footings are often ridiculed, picketed and persecuted.”
That argument doesn’t wash for Linda Stay, whose ancestors were early Mormon converts. Stay said she was doubly transformed by Prop. 8. She and her husband, Steve, finally quit the church — along with 18 other family members and a few close friends — and became gay right activists.

The St. George woman’s family, which includes two gay children, will play a central role in a documentary film, “8: The Mormon Proposition” currently in production. Stay’s son, Tyler Barrick, married his boyfriend in San Francisco on June 17, 2008, the first day gay marriage was legal in California.
Miami-area filmmaker Reed Cowan said the Stays’ story is a painful representative of many Latter-day Saint families, including his own, that needed to be told.
“It used to be that I could defend my church and my heritage, but what they did here, they crossed the line and they made it very hard to defend their actions,” said Cowan, whose family has cut him off since he began work on the film.
With the gay rights fight far from over, some believe Prop. 8 could continue to frustrate the church’s image for years to come, much like polygamy — the church’s own one-time alternative form of marriage — and a policy on keeping black men out of the priesthood, issues that have lingered years after the practices were abandoned.
“The church is certainly going to survive and thrive, there’s no question about that,” said the National Center for Lesbian Rights’ Kendell, who is raising three kids in California with her partner of 16 years. “The issue is, what will be its image in the average American mindset.”

To see the church characterized, because of its own actions, as one in a group of anti-gay religions and as a religion that forces members to choose faith over family is “a tragedy of generational proportion,” she said. “And it seems to me, that it was entirely unnecessary.”

Copyright 2009 The Associated Press. All rights reserved. This material may not be published, broadcast, rewritten or redistributed.
This story appeared in publications across the US including: USA Today, New York Times, Los Angeles Times, MSNBC and Forbes Magazine